One year ago, we announced the creation of the American Mosaic Journalism Prize. This unrestricted cash prize of $100,000 per recipient is awarded to freelance journalists for excellence in long-form, narrative, or deep reporting about underrepresented and/or misrepresented groups in the American landscape. We created the prize as part of our work that supports journalism as an essential arm of U.S. democracy—recognizing that we live in a time when journalism seems both vulnerable and deeply needed, with the ability to expose audiences to new perspectives and bring about understanding.

Today, we are pleased to announce the newest recipients of this prize: Rachel Kaadzi Ghansah and Abe Streep. 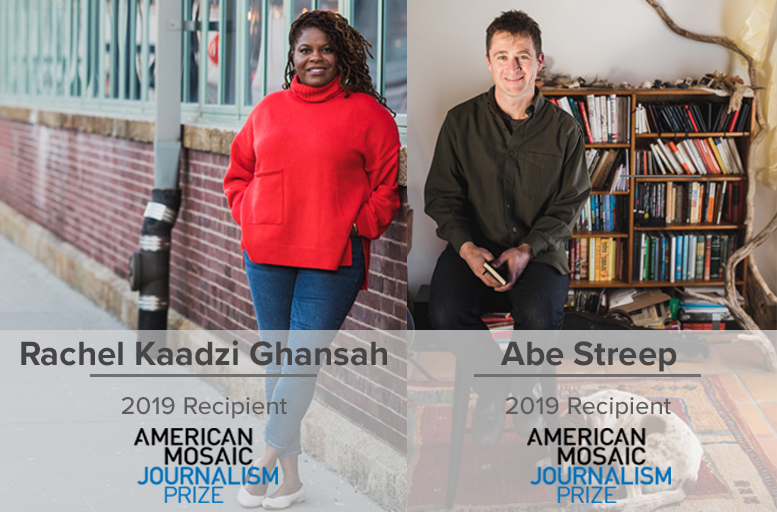 The prize—a complete surprise to its recipients—is based on confidential nominations from leaders in journalism throughout the country. The recipients were selected by 10 esteemed judges who this year included journalists from the Washington Post, the Los Angeles Times, NBC/Telemundo, NPR, Buzzfeed News, Columbia University, Barnard College, and freelance journalism.

We could not be more pleased with the judges’ selection for the 2019 recipients.

“American Mosaic Journalism Prize recipients take us inside the lives of people whose stories we need to hear,” notes Foundation Board Chair Liz Simons. “These accomplished freelancers deliver the kind of nuance and honesty that can only be imparted by the long-form investigative journalism that is their craft. The urgency of their work grows with every year.”

As the citations from the 2019 prize judges note:

“Rachel Kaadzi Ghansah’s deeply reported and essayistic writing pushes the form of longform journalism, ranging from a poignant profile of master painter Henry Taylor to a searing exposé of the hotbed of racism and white supremacy that fueled the heinous murder of nine African-Americans in Charleston, South Carolina. Her power of observation and nuanced writing both shines light on Black Americans and dares us to look at the forces that shape race in America.”

And, “Abe Streep’s reporting bursts with compassion and urgency as he lifts up stories of often-overlooked communities in the American West, such as a Syrian refugee family building a new life in Montana, or a Native American high-school basketball team grappling with a flurry of suicides in its community. With great sensitivity, his work reveals the rich tapestry of cultures and lives that intersect in a part of the country far too often characterized by the stereotypes of an urban-rural divide.”

We invite you to learn more about Rachel Kaadzi Ghansah and Abe Streep, and read their extraordinary work, by visiting the prize’s page on our website.