Self-identified Latinos in the United States are more convinced that global warming is happening and that it is caused by human activity, according to a national study conducted by grantee the Yale Program on Climate Change Communication. Latinos are also more worried about climate change, more supportive of climate change policies, and more willing to demand political action than non-Latinos.

Some key findings from the report include: 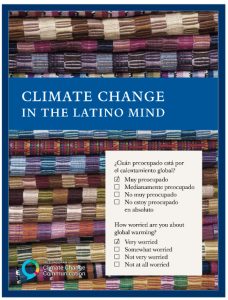 Other key findings can be found here, and the full report (in English) can be accessed here.

In 2016, the Heising-Simons Foundation’s Science program supported the Yale Program on Climate Change Communication with a grant to develop strategic communication tools around the Hispanic community’s beliefs and attitudes toward climate change. Included in this was support of the national radio program, Yale Climate Connections.