Determining the fate of water on Mars to delineate key differences in the geological processes and habitability among terrestrial planets.

Determining the fate of water on Mars to delineate key differences in the geological processes and habitability among terrestrial planets.

Eva Scheller’s inspiration to probe the enigmatic past of water on Mars ignited during a California Institute of Technology exchange program. Bridging the worlds of laboratory experimentation, remote data science, and theory, Eva examines the history of geological processes on terrestrial planets to decipher markers of habitability. In a breakthrough moment, she confirmed that most of Mars’ water was locked within its crust, overturning the predominant theory that it had escaped through the atmosphere. Eva later made key findings related to ancient water environments and organic compounds with the Perseverance rover. She also led a collaboration to synthesize the findings from an extended Perseverance rover mission to acquire samples from a sequence of ancient Martian rocks she characterized and defined.

In her fellowship, Eva will continue to address enduring questions around water on Mars to place its history in context with other rocky planets. She will first conduct a laboratory experiment to investigate the chemical reactions between water and basalt, the most common rock found on the Red Planet. Findings will explore the possibility that old liquid water environments affected the planet’s climate and habitability potential. Next, Eva will perform remote fieldwork using the Perseverance rover to ascertain if water was once sequestered in a key region of Mars’ crust. She will then combine results to model life-sustaining conditions on terrestrial planets with the aim to support future observations in the solar system and beyond. Eva received a Ph.D. in geological and planetary sciences from the California Institute of Technology in Winter 2022.

“There are still so many intriguing, unsolved questions about Mars. Even though Earth and Mars started out the same, a key difference occurred in the geological processes that caused Mars to be more inhospitable to life. That’s the puzzle I want to pursue during my fellowship.” 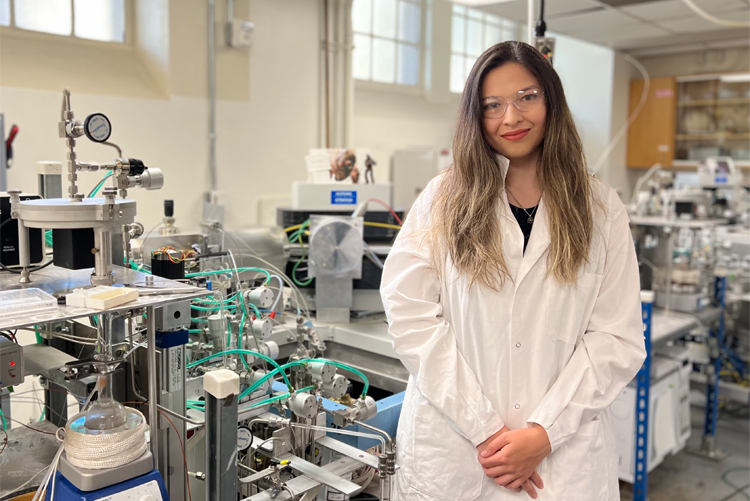